The Spiritual Flame: The Meaning, History, and Uses of Fire Agate

Home / Healing / The Spiritual Flame: The Meaning, History, and Uses of Fire Agate 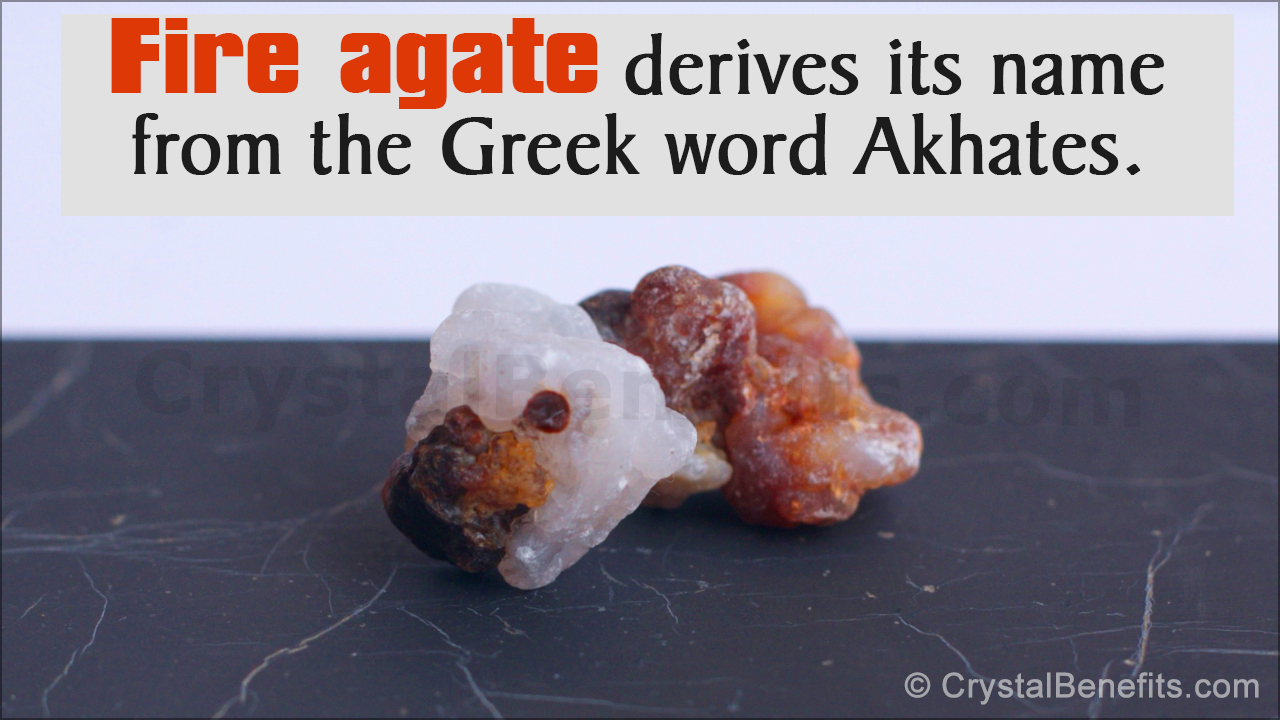 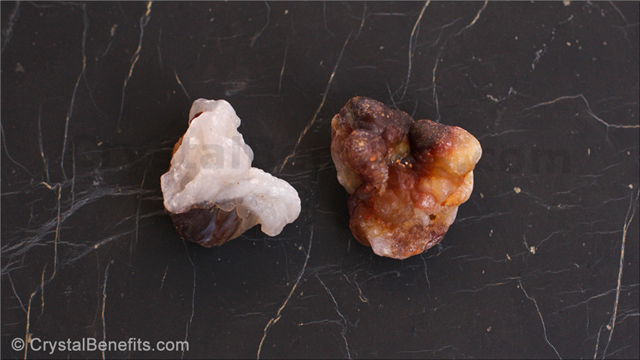 Drawing upon its fiery features for its name, fire agate is a semi-precious gemstone that is only found in a few places across our planet. Due to its brown hues with flame-like tongues of red, orange, green, and gold, it is no wonder that it has fire in its name. Agates are a variety of chalcedony. Agate is derived from the Greek word akhates, which is the name of a river in Sicily where the stones were supposedly found.

Fire agates are only found in northern Mexico and the southwestern United States. The two regions where fire agates can be found include the Sonora Desert region and between the Sierra Madre Occidental and Oriental Mountains north of Mexico City.

Agates have been used by ancient cultures for jewelry and beads. Fire agates have become commercially available only in the last 60 years.

Fire agates are thought to have spiritual, physical, mental, and emotional healing properties. Its brown and red hues make it a good choice to activate the Root Chakra to stabilize one’s spiritual foundation. Its orange and gold tones make it ideal to activate the Sacral Chakra, promoting one’s intuition, sexuality, and vitality. Its gold and yellow hues contribute to its ability to activate the Solar Plexus Chakra, empowering one with the courage to speak for himself and regain self-confidence. 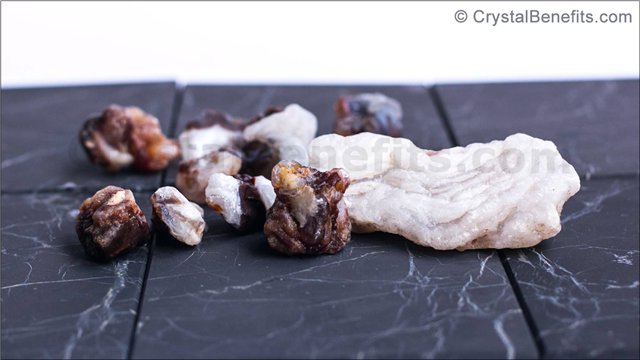 There are only a few places on Earth where Fire Agate is found. These deposits are located in northern Mexico and the southwestern United States. Approximately 24 to 36 million years ago, during the Tertiary period, these regions saw massive amounts of volcanic activity. Hot water with large amounts of silica and iron oxide filled bubbles and cracks in the rocks. 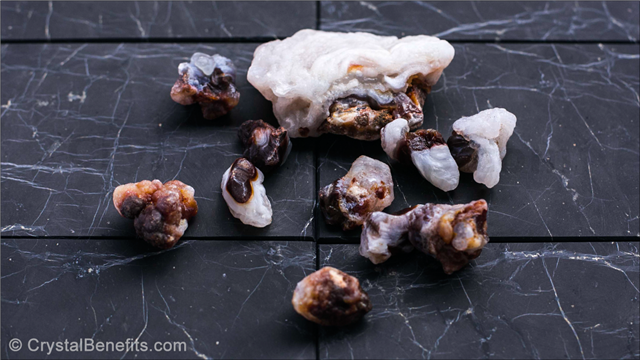 There are two main areas that fire agate deposits can be found. The first being the Sonora Desert region and the other is situated between the Sierra Madre Occidental and the Sierra Madre Oriental mountain ranges just north of Mexico City. There are certain mines owned privately, but are open to the public for a fee for digging. Others are located in restricted public lands where mineral collection is prohibited. 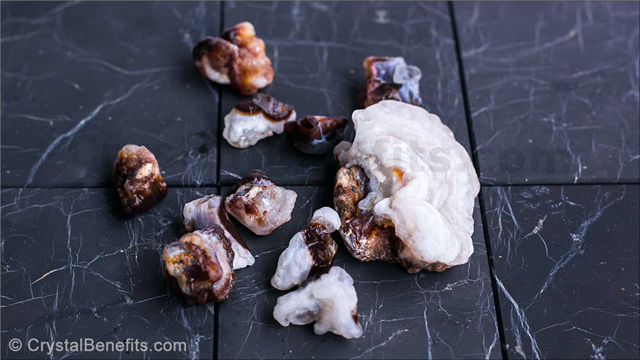 Agates have been used in jewelry and beads by the ancient Greeks and many other cultures. However, due to fire agate being limited to a small region, it doesn’t have as much of a rich history as other gemstones like amethyst and citrine. In fact, fire agate has become commercially available only in the last 60 years.

Uses and Benefits of Fire Agate 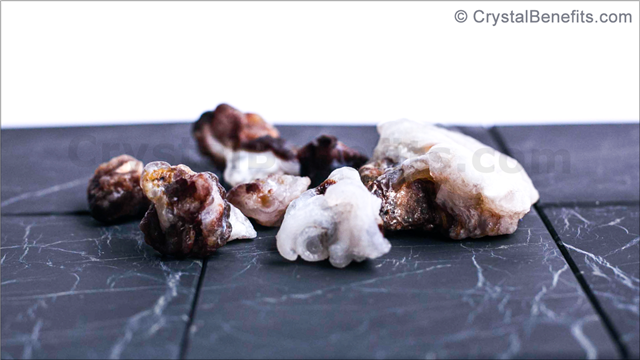 Fire Agate is known for its physical, mental, emotional, and spiritual healing properties. Its ability to enhance our physical bodies improves one’s vitality and promotes youthfulness. Mentally, its fiery nature allows people who are shy or are easily taken advantage of to speak up for themselves and have their voices heard. Moreover, it helps an individual overcome negative opinions that are formed by others.

On an emotional level, it motivates and encourages one to break the shackles of routine and muster great courage. It promotes sexual wellness and is a strong aphrodisiac that can promote greater passion within current relationships or aid in attracting new lovers. And finally, on a spiritual level, not only does it rouse one internally, but it also keeps an individual grounded, which is a perfect combination for one seeking to open themselves up spiritually.

The brown hues and red colors of the fire agate make it great for activating the Root Chakra (1st). The Root Chakra is the foundation of the physical and spiritual energy of the entire body. When this is out of balance, one may have low energy and feel like they are spiritually similar to a dwindling flame. Fire agate can rekindle your energy and improve your stamina once again.

The fire agate can come in the form of gold and orange shades. This makes it perfect for activating the Sacral Chakra (2nd). It promotes the circulation of information from the mind to the body and vice versa. When it is out of balance, it is harder for one to trust in their gut feelings and intuition. As a result, confusion arises. However, a fire agate can help restore these functions, as well as make one more susceptible to going with the flow of life and letting them enjoy it more fully.

The fiery and inspiring nature of fire agate makes it an ideal fit for activating the Solar Plexus Chakra (3rd). This Chakra also has another name – the Power Chakra. The reason for this is that it is the epicenter of energy where your own physical power is derived from. Its gold and yellow tongues of flame make it an ideal fit to promote self-esteem and confidence.