The Merchant’s Stone: The Meaning, History, and Uses of Citrine

Known by many different names, such as The Merchant's Stone for its luck-bringing qualities, the Stone of the Mind for its ability to facilitate psychic powers, and the Light Maker for its sun-like energy, Citrine is the birthstone of November.

Home / Healing / The Merchant’s Stone: The Meaning, History, and Uses of Citrine 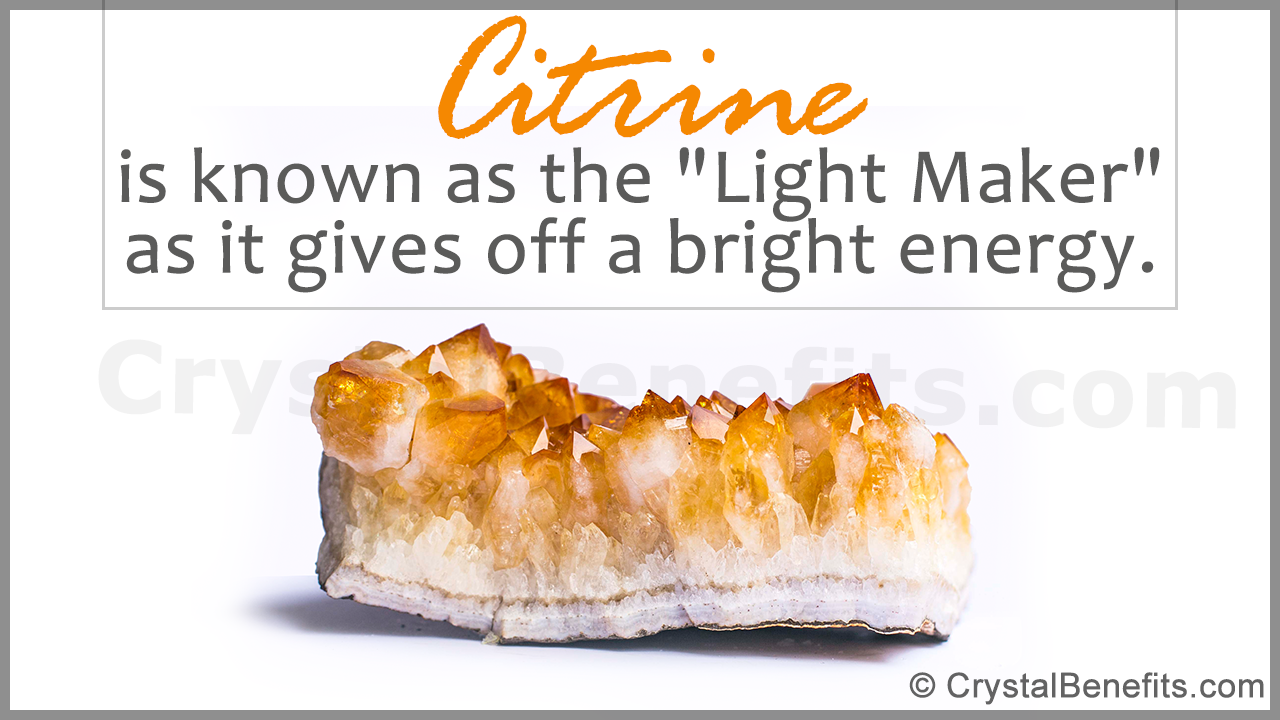 Known by many different names, such as The Merchant’s Stone for its luck-bringing qualities, the Stone of the Mind for its ability to facilitate psychic powers, and the Light Maker for its sun-like energy, Citrine is the birthstone of November.

Citrine and its Names 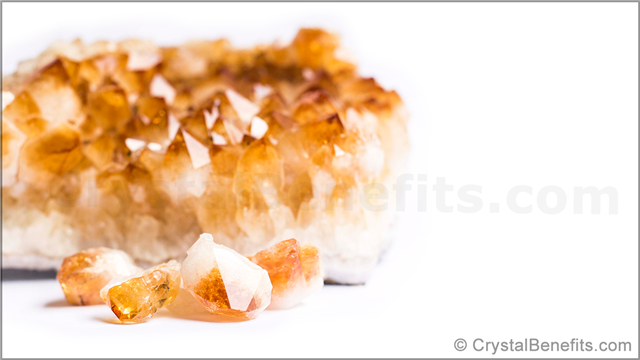 Citrine is known as the Light Maker, for the bright energy it gives off. It is known as the Stone of the Mind because  it was a belief in many ancient cultures that by placing the stone on an elder’s forehead imbued them with greater psychic powers. It is also known as the Merchant’s Stone or it is believed to bring good luck. The name of the stone can be traced back to the late 14th century in French as citrin which means “lemon-colored” and from Latin citrus in relation to the citron tree.

The Formation and Mining of Citrine

Behind Amethyst, Citrine is the most popular gemstone in the quartz family. It usually comes in the form of a yellow or reddish-brown stone. Citrine is mostly formed by heat treating Amethyst. Amethyst is formed by gas cavities in lava. When the lava hardens, these cavities remain intact and get filled up with a liquid that contains iron. Over time, this liquid turns into amethyst. Citrine can also be created by heat treating Smoky Quartz from certain areas in the world. Amethyst can also turn into Citrine through natural means of heat treating.

Though extremely rare, natural citrine comes in yellow to orange-yellow hues. The heat-treated citrines have darker hues of brownish-red or dark orange-brown. The naturally occurring citrine is often called lemon quartz and is lighter. Moreover, citrine can also be similar to smoky quartz in its formation. 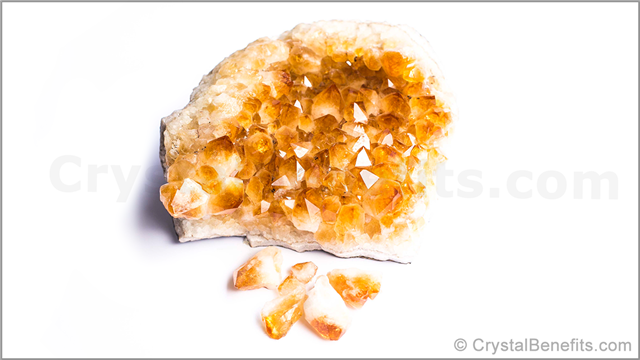 During the Hellenistic Period in Greece between 300 and 150 B.C., citrine was used in decorative pieces. The ancient Egyptians created Talismans out of this stone. The ancient Celts and Scots used citrine in protective amulets to stave off plague and the venomous bites of snakes. It is also described in the Bible in Exodus as one of the twelve gemstones that adorn High Priest Aaron’s breastplate.

The gemstone gained much popularity during the Victorian era. Although it was often found in “Scottish” highland jewelry, this supposedly authentic movement was created from the romanticized writings of Sir Walter Scott during this period. Unfortunately, after the failed Jacobite rising in 1745, the government took steps to prevent future rebellions. This included the Act of Proscription, which banned highland dress unless worn for military service, and the Heritable Jurisdictions which removed the powers exercised by the chiefs over their clansmen. Although the Act of Proscription would eventually be repealed, it achieved breaking the back of the already declining clan system and much of the highland heritage.

In 1822, Scott was able to organize King George IV’s visit to Scotland. The king paid homage to Scotland’s heritage and appeared in a Royal Stewart kilt. This started a tradition of visits by future monarchs. This trend of wearing kilts took hold, and as such, spurred the creation of traditional functional jewelry to hold in place plaid wraps and kilts. This jewelry was made using silver and was designed with engraved designs that included Celtic motifs, flowers, and other themes of nature. It also included local pebbles, such as amethyst and citrine among other gemstones.

When Did Citrine Resurface in Popularity? 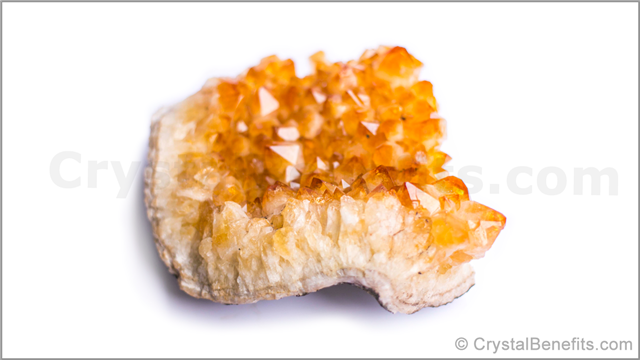 Citrine resurfaced in popularity in the early 20th century during the Art Deco period. Its unique coloring was a favorite among many during the period. It was used in jewelry such as pendants, rings, bracelets, and tiaras. Moreover, it was used not just in jewelry, but for interior design pieces, furniture, appliances, and even in architecture.

In the 1930s, the gemstone took off in Europe. This was in part due to the efforts of a group of gemstone cutters who moved to South America from Germany. It is one of the places in the world where citrine can be found. They shipped large amounts of the gemstone back to Germany, feeding the market back in their homeland. Today, its popularity is in its abundance. It is often used as a cheap substitute for Topaz and can be a way for someone to get more bang for their buck now in a big statement piece.

Uses and Benefits of Citrine 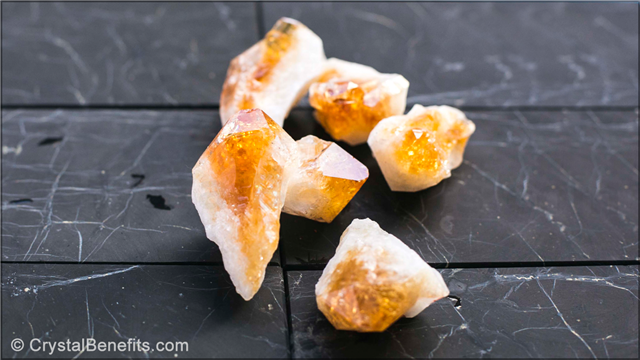 Citrine is known for its healing properties and has been used as a means to defend physical harm and ailments. It was used by healers to help one overcome issues with their digestion. It was used as a way to purify the digestive system, cleansing it of any impurities that may have built up over time. It also helps a person who is in distress to overcome these feelings and regain calm.

It is believed that citrine can be used to restore the circulatory system. It can cleanse the blood, and act as a natural tonic for organs. It helps with the processes of the kidneys, as well as the spleen and pancreas. Citrine also stimulates the nervous system, it bolsters the nerves and alleviates eye problems. Much like other gemstones of the same hue, it can be used as a treatment for diseases affecting the bladder as well as improve the functions of the thyroid gland.

Citrine has the ability to activate three different chakras, the Root (1st), Sacral (2nd), and Solar Plexus (3rd). With its hue similar to that of gold, it can help activate the Root chakra, which can aid one in gaining financial independence. It has a strong power to motivate, which allows it to elevate physical energy and take it to an emotional level. While placed on the Sacral chakra, it can help stimulate sexuality and increase fertility. Being placed more centrally on the Solar Plexus chakra will help increase the circulation of energy throughout the body and increase the overall level of energy. Contained within the stone is the power of the sun, and as such, it brings light and joy to a person’s life.

Meditation using citrine will bring warmth to a person’s body, clear their mind, and inspire their thoughts. The stone will help you hum with such vibrancy that it will help you increase the flow of energy from the mind, body, and your soul. It can also be added to different spaces you frequent, such as your office or your bedroom as a decorative choice to inspire creativity and instill a sense of security in those occupying the room. 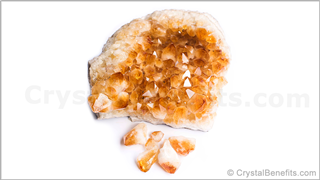 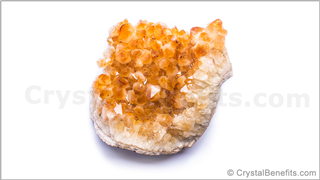 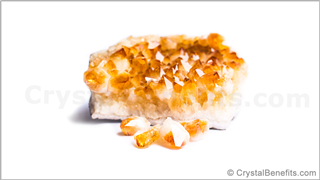 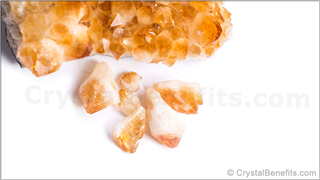 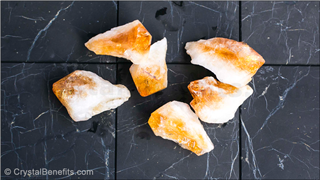 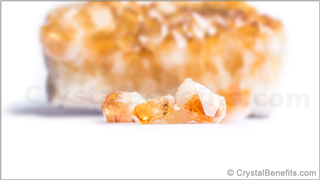 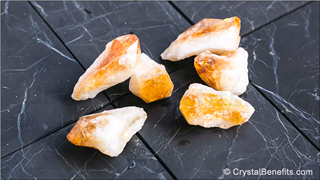 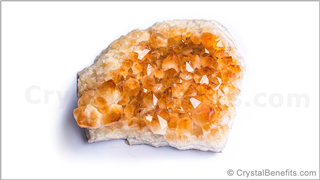 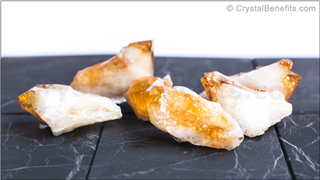 Disclaimer:The information provided here is for entertainment and reference purposes only. It is based on centuries of folklore, most of which came about before the age of modern medicine. It is not meant as actual medical information. For advice about any of the illnesses listed, please visit a qualified physician.