Emerald Identification Tips: How to Tell if an Emerald is Real or Fake

An emerald-studded piece of jewelry is a definite must-have for all women. The look and feel of it is absolutely exquisite, like a drop of royal heritage ... truly magnificent! The different variants of this precious stone are mined, synthetic, doublets, triplets, and fake! This CrystalBenefits post gives you some essential emerald identification tips to help you understand if an emerald is real or fake.

Home / Focus / Emerald Identification Tips: How to Tell if an Emerald is Real or Fake 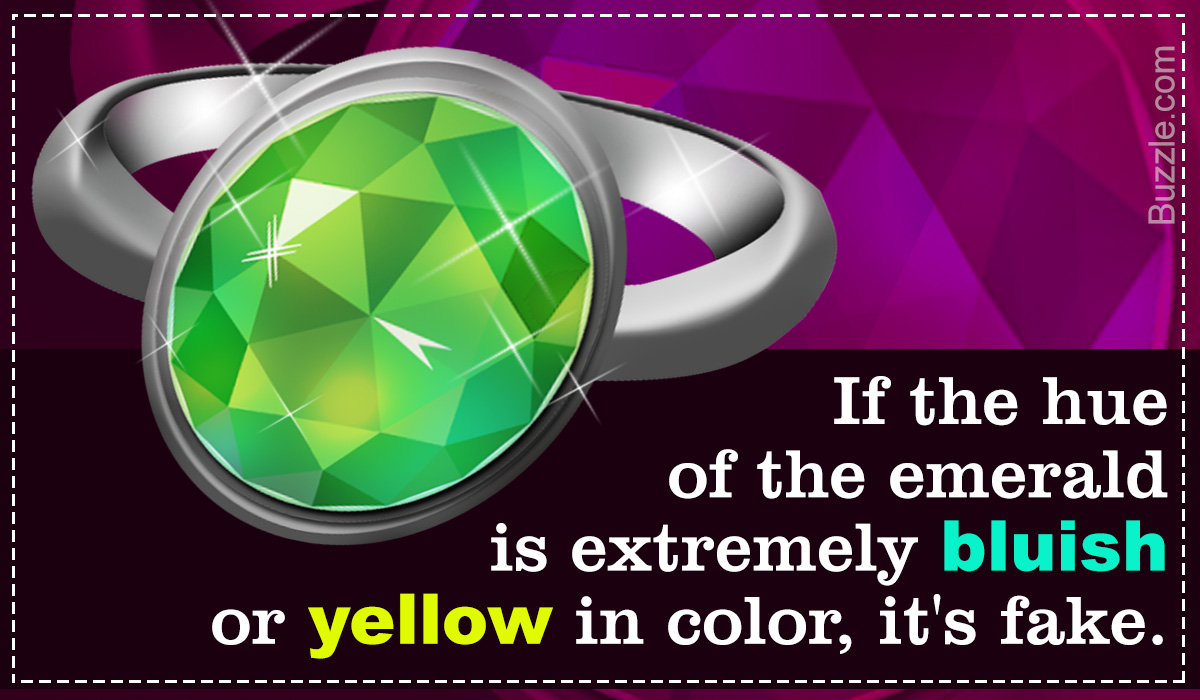 An emerald-studded piece of jewelry is a definite must-have for all women. The look and feel of it is absolutely exquisite, like a drop of royal heritage … truly magnificent! The different variants of this precious stone are mined, synthetic, doublets, triplets, and fake! This CrystalBenefits post gives you some essential emerald identification tips to help you understand if an emerald is real or fake.

The Roman Emperor, Nero, who was presumed to be short-sighted, used a specially designed emerald stone, through which he would see gladiator matches. This he did to refresh and apparently “restore” his sight.

Among the various precious gems and stones, emerald has this explicit extravagance to it, don’t you think? Its deep-green color is the epitome of the ideal green. In fact, the word emerald is derived from the Greek word ‘smaragdos’, which in turn, is derived from the Old French word ‘esmeralde’, and it means ‘green gemstone’. For its color, richness, healing, and soothing properties, this stone has been a prized possession of many royals since ancient times.

According to the International Colored Gemstone Association, some of the superior-quality emeralds are mined in Columbia. However, other countries including Zambia, Brazil, Zimbabwe, Russia, India, Madagascar, Afghanistan, and Pakistan are also among the noteworthy places where this gemstone is found. Another important thing that one should be aware of as a buyer, is that not all emeralds available in the market are mined. Most manufacturers create these in labs synthetically. The thing with synthetic emeralds is that since they are artificially created with the same composition as mined emeralds, they are ‘technically’ not considered to be fake. Also, some people also tend to sell green-colored glass, other form of beryls, peridots, and the like, as real emeralds. These fallacious practices make it imperative for all buyers to be aware of the signs that help differentiate between a genuine emerald from an imitation. These are listed in the following section.

Signs that Identify a Real Emerald from a Fake One: What to Look For

A lot of things need to be kept in mind to assure that you’re not being ripped off completely by a gemstone dealer. Beginning from the place you’re buying the emerald, to the price you’re paying, to the size of the emerald you’re selecting, there are a lot of facets to buying a genuine stone. The following points explain the things you must look out for.

The color of the emerald speaks for its authenticity! This stone comes in various hues of green, varying from the dark tones to the light ones. According to the GIA, the most valuable emeralds are pure green to bluish green in color. They have a tone that is not extremely dark, along with a vivid color saturation. The color of the stone is evenly distributed. However, they also warn that if the hue of the stone is extremely bluish or yellow in color, the stone is fake, perhaps a different variety of beryl.

It is very common for emeralds to have inclusions, which are nothing but the elements that have entered the stone during its formation. Mined emeralds that are absolutely clear are extremely rare, and therefore, one should be cautious while being presented such pieces for buying. Again, focus on the color. According to the International Colored Gemstone Association, “… even with inclusions, an emerald in a deep, lively green still has a much higher value than an almost flawless emerald whose color is paler.” Inclusions may include lines, crystals, bubbles, and the like, that will give the stone a cloudy appearance. These can be seen with unaided eyes.

Fire is the term used for the luster that is emitted by the stone under white light. Real emeralds will not display a good amount of fire, it will be very low. Therefore, if the emerald shown to you emits hues of rainbow colors and resembles the brilliancy of a diamond, is it probably not real.

In high-quality emeralds, the inclusions should not affect the clarity of the stone. If it does, its price is also reduced drastically. The brighter the emerald is, the better it is. However, as mentioned earlier, an absolutely clear and transparent real emerald is quite rare, and one should be wary when opting for such a choice, i.e, no inclusions and 100% clarity.

Mined emeralds are highly expensive and can be worth thousands of dollars. However, be wary of the sellers that claim the stone to be genuine but charge an exceptionally “low” price. While synthetic emeralds are cheaper than the mined ones, know that someone may also charge you the price of a mined diamond and sell you a low-quality imitation. Which is why, it is important for you to buy from a trusted dealer. Even if he says that the emerald is from Columbia, it doesn’t guarantee that it will be genuine. It is best to purchase it along with a report from a renowned gemological institute, especially if you’re buying a big emerald.

Examine the edges of the emerald carefully. A genuine emerald has a good amount of hardness, varying from 7.5 to 8 on the Mohs scale. If the edges seem worn out or damaged, it implies that what you’re looking at is probably glass. Glass scores 5.5 on the Mohs scale, and therefore, wears out easily.

Also, carefully analyzing the edges as well as the surface of the emerald will help you identify if it is a ‘doublet’ or ‘triplet’. These terms are used when, in order to make the stone look bigger, dealers add glass or plastic layers over the emerald. The artificial layers are colored in intense shades of green to make it look more attractive and valuable. To determine if your stone hasn’t been augmented in this way, hold it between your fingers and view it from the side. You are likely to see the layers that are artificially created around the actual emerald.

In the market where it is extremely difficult to differentiate between what’s fake and what’s real, it wouldn’t be wrong to say that identifying a genuine emerald (or anything) isn’t as easy as it seems. Fraudsters do a pretty good job in making imitations more attractive than the real ones. And when something so beautiful comes to us in unexpected (low) prices, we are bound to fall into their trap. Therefore, it is strictly recommended to get the emerald tested by a professional to be 100% sure, or to get it from a reputed dealer, along with a report of authenticity.